Praxity – the world’s largest Alliance of independent accountancy firms – reports a 12%* increase in member revenue for 2015.  This is the ninth consecutive year, since its foundation, that the Alliance has reported significant growth.

Figures submitted in January to the IAB World Survey of Accounting Networks, Associates and Alliances reveal that although member firm fees rose from US $4.36bn in 2014 to US $4.5bn a year later, indicating a rise of almost 3%, when taking the significant exchange rate movement into account it was an 11.93% rise on a like-for-like basis*.

This represents an increase in six of its seven service line revenue streams; led by nearly a 250% rise in Corporate Finance, followed by Litigation Support at more than 60%, Management Consulting at over 36%, Tax Services in excess of 25%, Audit and Accountancy at 20%, and Corporate Recovery/Insolvency above 9%. Client demand for Other services fell close to 68%.

Praxity’s total number of partners has grown by over 16% to 3,287 and in line with the Government’s call for greater gender transparency; the Alliance is publishing a breakdown of its male and female partners and professionals.

Praxity participants now employ over 39,000 people - a rise of just over 10% since 2014 -in 630 offices across 103 countries. Growth is a result of Participant mergers and organic growth, plus new additions in Italy and Australia.

The end of the year signalled the end of an era with Chairman Rick Anderson and his predecessor, Jos van Huut, stepping down from their management and committee roles. Hilton Saven, Mazars South Africa chairman and Gordon Krater, managing partner at Plante Moran in the US have taken over as chair and vice chair respectively.

Hilton comments: “We owe a great deal of gratitude to Rick and Jos, they provided outstanding leadership, taking tough decisions and challenging strategies. Their legacy and vision for the Alliance lives on; we compare well to our peers, our reputation is growing, costs are under control and we are well provided for. I’m confident Praxity membership will continue to facilitate a seamless quality service for cross-border clients as demonstrated by the number of successful collaborations over the past few years.”

Gordon echoes these sentiments: “Our results confirm the quality of our member firms and their ability to serve clients’ needs. I’m delighted to see more women being offered and accepting partnership roles and accounting for over half our professional representation at some 53%. I look forward this year to member firms workingtogether and delivering pragmatic value-added services.” 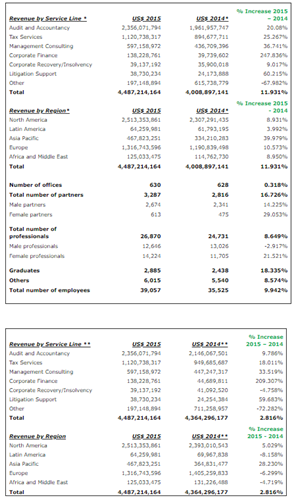 * Using 2015 exchange rates for both years and thus comparing 2014/2015 on a like-for-like basis, so no Foreign Exchange impact.

Praxity is amongst the top 10 global Accounting Associations, a not-for-profit organisation, and according to the latest IAB survey, the largest Alliance of accounting firms globally. Praxity’s administrative centre is in Epsom, Surrey, UK. Praxity is represented in 103 countries and by more than 3,250 partners and almost 27,000 independent professionals.